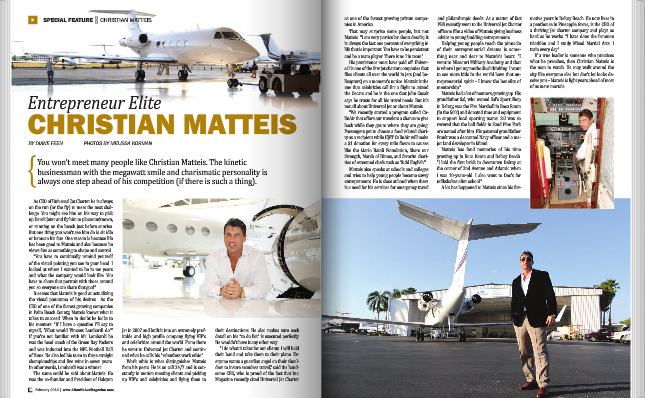 As CEO of Universal Jet Charter he is always on the run (or the fly) to meet the next challenge.  You might see him on his way to pick up Derek Jeter and fly him to places unknown, or running on the beach just before sunrise.  But one thing you won’t see him do is sit idle or bemoan his fate.  One reason is because life has been good to Matteis and also because he views fate as something to shape and control.

“You have to continually remind yourself of the visual painting you see in your head.  I looked at where I wanted to be in ten years and what the company would look like.  You have to share that portrait with those around you so everyone can share that goal.”

It seems that Matteis is good at actualizing the visual panorama of his desires.  As the CEO of one of the fastest growing companies in Palm Beach County, Matteis knows what it takes to succeed.  When in doubt he looks to his mentors.

“If I have a question I’ll say to myself, ‘What would Vincent Lombardi do.'”

If you’re not familiar with Mr. Lombardi he was the head coach of the Green Bay Packers and was inducted into the NFL Football Hall of Fame.  He also led his team to three straight championships and five wins in seven years.

The same could be said about Matteis.  He was the co-founder and President of Halcyon Jet in 2007 and built it into an extremely profitable and high profile company flying VIP’s and celebrities around the world.  From there he went to Universal Jet Charter and continued what he calls his

Work ethic is what distinguishes Matteis from his peers.  He is on call 24/7 and is constantly in motion meeting clients and picking up VIP’s and celebrities and flying them to their destinations.  He also makes sure each detail on his